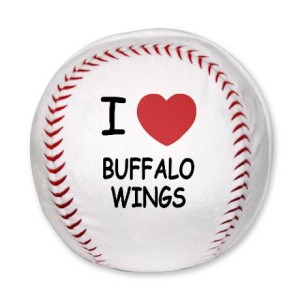 Image brough to you by Monster Energy drink and: http://goo.gl/bXjPF

If you're a guy and this title caught your eye, congratulations…you're totally normal. If you're a lady and you're reading this, guess what?! You're normal too. It took a long time for me, as a dater, a woman, a writer, a career girl, to figure out who I wanted to be with. I didn't know what job he’d have, how tall or fit he would be, or how many kids he'd want, where he'd be from or how he'd feel about various Disney characters. What did I know? I knew I wanted someone who could throw back a plate of wings while, ruthlessly, cheering on his baseball team. Well, the bad news is, he's mine, and you can't have him but the good news is he's just one of many.

In a large, metropolitan city, sometimes things become about “having”; having nice jewelry, great concert tickets, fancy cars; meeting people can become less about what you share together but about what you give each other. If that's fine with you, or it's what you're looking for, please exit to your right, tips are appreciated; thank you for reading. For the rest, hold on tight!

In some areas of the world, the state or local team is the most important part of some people's lives and if you relocate from the humble town of the Locust Valley Beehives, it can be hard to find a date that identifies with your need for weekly blue cheese in a Dixie cup. There are plenty of guys out there who love baseball, beer, and wings and do not come equipped with a beer belly and a “Douche Bags R Us” label. Sports fans, in general, are painted in kind of an aggressive, overbearing and, well let’s just say it, drunk light. Just like any stereotype, there is a lot of truth to that, and no girl wants to be with a hog who can’t stop talking about trades and stats. Then, they’re those of us who are totally normal, adjusted, attractive human beings. We just have ADD when it comes to anything during sports scores time.

Males, if you think I'm one in a million, you'd also be incorrect. While most girls out there shrug at the mention of a break-away or assume a free throw is something you don't need to pay for, there are more than a handful of women who just want to find a great guy who isn't going to judge them for wearing a jersey under their clothes all day Sunday (just incase…) or won't get mad if we accidently throw our drink at the TV after the refs last call. Oh, and we also don't come in the form of female weightlifters or the bunchiest of lesbians at the gay bar. Actually, most of the sports-minded, all-star loving gals I know can pull off a pair of heels and a little black dress better than last stripper you tipped.

A girlfriend once asked me where I found my baseball obsessed, hot sauce inhaling beau. “At the bar, during a baseball game”, and we weren't even cheering for the same team. People are really bad at meeting each other nowadays because they try too damn hard. From one dating site to another, profile editing, whoring your friends-friends-friends on Facebook, and wearing the most expensive shirt or shoes they can find every Friday night just to attract the hottest in the club. Newsflash, if I'm dancing to my favorite song, I DON'T want to engage in a conversation about the NHL lockout. Go figure, you want someone who would rather marry cheese fries and a Corona instead of you? Throw on a baseball cap and order a round, sit back and attract the flies with honey…or, rather, wing sauce.

Posted by Doing Laundry in Heels

by Doing Laundry in Heels time to read: 3 min Dating & Relationships How To Get A Date On Valentine’s Day Dating & Relationships Your New Dating Plan for the New Year
3